On the eve of the first flight of the J-15, why did they invite the test pilots to dinner?

On August 31, 2009, my country's self-developed J-15 carrier-based fighter made its maiden flight. It has been 13 years, and the "Flying Shark" has been flying higher and stronger. The night before the first flight of the J-15, the "special" Dinner was unforgettable for the test pilots. At 10:46 a.m. on August 31, 2009, with an order from the tower, J-15 first flight test pilot Li Guoen drove the fighter into the air and landed safely after 13 minutes of flight. After the aircraft stopped, the arresting hook was lowered and the wings were folded, and the J-15 successfully achieved its ground-based maiden flight. The successful maiden flight of the J-15 is exciting.

But little-known is that on the day before the first flight, the dinner that night was unforgettable for the test pilot Li Guoen, which made him feel that this test flight was unusual. Li Guoen recalled: "The night before，the technicians invited me to a dinner, which was unprecedented in the history of the first flight. Conversely, there may be hidden risks here. But the country has invested a lot of energy, financial resources, and personnel. I thought at the time that since I have engaged in this profession, even if I encounter risks, I think I am worth it... I choose to test flight in this life, and I will never regret it for the rest of my life.”

In his more than 20 years of test flight career, Li Guoen has flown no less than 30 types of aircraft, and it is normal to face danger and deal with emergencies. He said: "The profession of a test pilot is definitely dangerous.

But it's up to someone to do the job, aligning their career choices with the needs of the country

Must be a good career. As a test pilot, I also find it interesting, constantly exploring new areas. When a fighter jet is lifted from your hands, especially when you see the fighter jets you have flown

When the troops are able to carry out their tasks, the joy of not expressing in words arises spontaneously.”

On November 23, 2012, the J-15 successfully took off and landed on the Liaoning ship for the first time. In June 2013, the J-15 took off and landed on the Liaoning ship again, and made its first station flight. This marked China becoming the third country in the world that can independently train carrier-based fighter pilots. 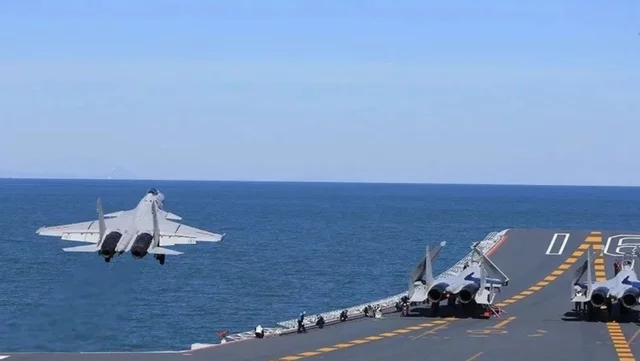 In December 2013, the J-15 was officially listed in the Chinese People's Liberation Army Naval Air Force.

In September 2015, the J-15 formation participated in the "September 3rd Military Parade" and was reviewed by the motherland and the people.

In December 2016, the J-15 went out of the first island chain with the aircraft carrier Liaoning and went to the western Pacific to carry out high-sea training.

In July 2017, the J-15 formation participated in the Zhurihe military parade.

In 2017, the Navy's carrier-based aircraft unit organized the J-15 night landing training to overcome the technical difficulties of taking off and landing at night.

In April 2018, during the military parade in the South China Sea, the Liaoning fleet and the J-15 fleet appeared.

In March 2019, the overall combat capability of the J-15 for partner aerial refueling was strengthened again. 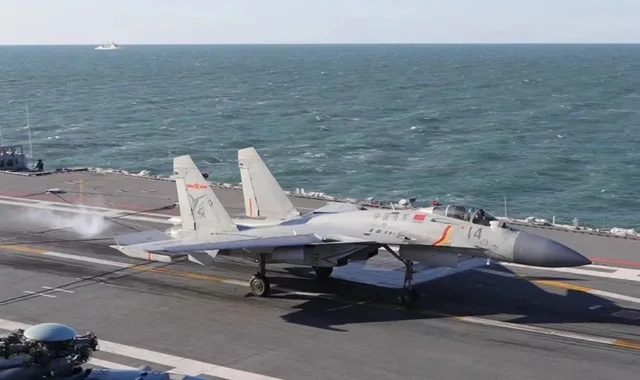 In November 2020, the first batch of carrier-based fighter pilots trained by the Navy's growth model passed the aircraft carrier qualification certification, achieving a historical breakthrough with the largest number of certified persons in a single batch, the smallest average age, and the shortest flight time and the shortest certification period.

In August 2021, a carrier-based fighter flight instructor of a certain Naval Aviation University obtained the night aircraft carrier qualification certification, from ground-based first flight to day and night take-off and landing of aircraft carriers; from sea and air assault training to partner-style refueling... 13 years Soaring in the sky, guarded by a bright sword for 13 years, the J-15 has become more and more sharp. Today, more "flying sharks" are on call at all times, always ready to fly high.